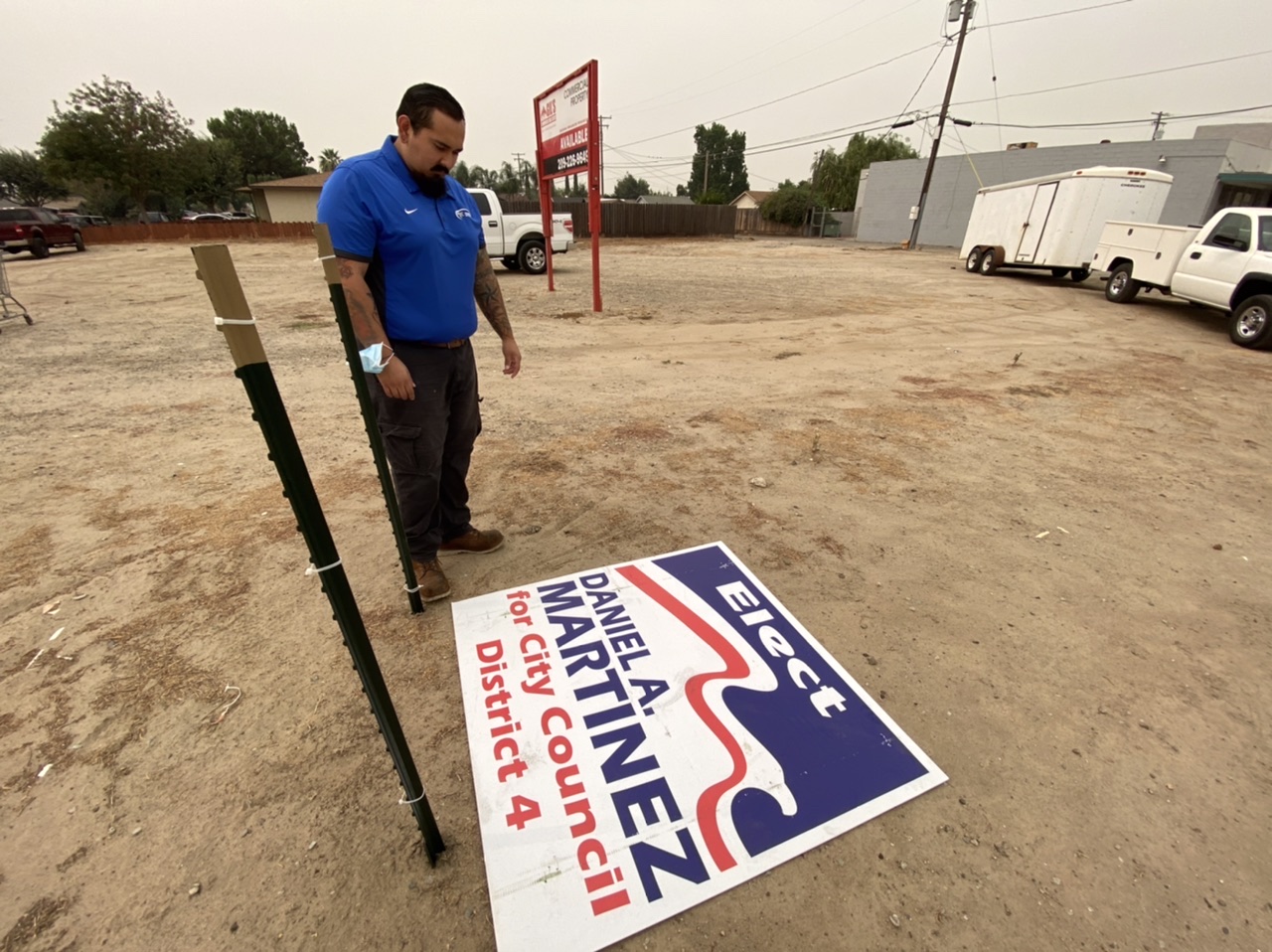 Daniel Martinez observes a sign removed for a second time in five days on Central Avenue in Ceres.

CERES – Signs belonging to various candidates running for election in Ceres were damaged and destroyed in recent days.

Signs belonging to councilman Brett Durossette were stolen according to social media posts on August 31st, while others were damaged and defaced with the word “racist” spray painted on them. Durossette is running for mayor of the City of Ceres.

“Honestly, I’m heartbroken,” Durossette said. “I’ve given my life to this community and helping not only youth, but anyone who has ever needed it.”

Surveillance images shared via social media show a woman taking a sign in a residential area. The woman appeared to be traveling in a Honda sedan.

“Of course not everyone is going to love me, but in my 29 years in education with a very diverse community and loving all these kids, I’ve tried my best to treat everyone with respect,” Durossette said.

While the photos shared to social media may shed a light on the thefts and damages, other candidates are facing similar instances of damage to their election signs.

Daniel Martinez, who is running for Ceres City Council District 4, had signs cut down and stolen. He noticed signs on Central Avenue either cut down off of chain linked fences or removed from properties.

“I feel for the councilman,” Martinez said. “I pay for all of my signs out of pocket and they’re not cheap. The costs can add up quickly.”

All of his damaged signs were already replaced, Martinez said Wednesday. Although he didn’t want to speculate on the cause, Martinez did note that whoever removed his large sign had to cut through several zip ties behind a chain linked fence.

“I don’t condone anyone spray painting the word racist on (Durossette’s) signs,” Martinez continued. “I met him once, and I think it’s unfortunate that this kind of thing is happening in the city.”

Javier Lopez, also running for mayor of Ceres, had signs damaged or kicked over.

“It has been brought to my attention that multiple candidate signs are being kicked, vandalized, taken down and/or stolen in Ceres,” Lopez said.

Lopez expressed his frustration with the incidents and instead encouraged people to vote in the upcoming election.

“All candidates including myself have invested time and money into these signs and I would ask that these actions stop! I would also ask any other news outlets who have reached out to me about this matter to report the story and not write opinion based on false allegations about me or other candidates. This is irresponsible on their part and should remember that the truth will come out once the investigation concludes. We must use our voices and vote, this election will be historical.”

The intentional theft or damage caused to a political sign is classified as a misdemeanor or infraction in the State of California, as noted in legislation text.

Click the following links to learn more about the candidates in this article: 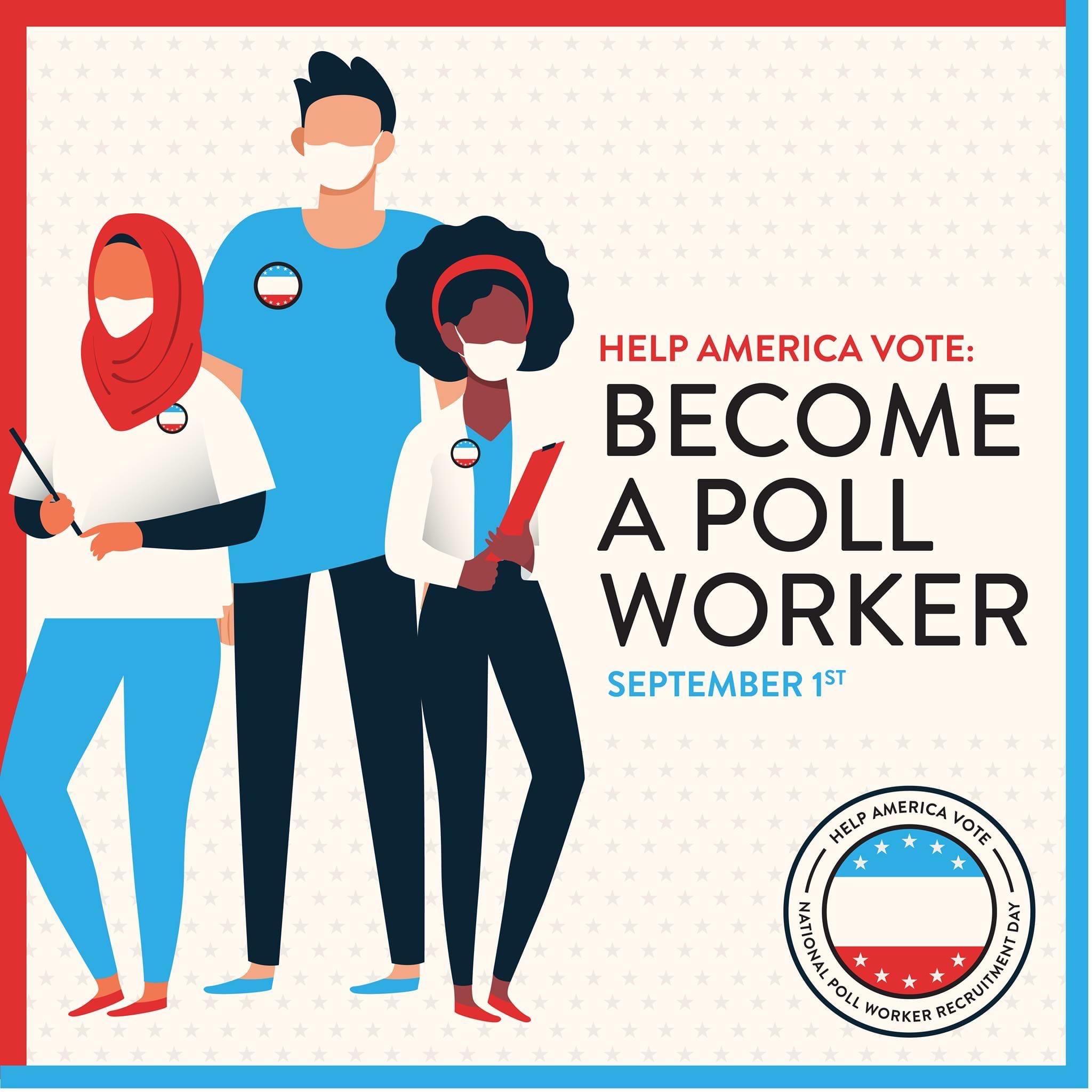 CALIFORNIA – Every first of September is an important day for the U.S. Election Assistance Commission. It serves as National Poll Worker Recruitment Day. The day is designated to help create awareness and encourage people to serve as poll workers with only two months left before the November election.

Some may wonder poll workers aren’t needed as much this year due to COVID-19 causing many to vote by mail, but the U.S. Election Assistance Commission says now America is facing a shortage of poll workers.

“Millions of Americans – especially voters with disabilities and those who lack reliable mail service – will continue to rely on in-person voting to cast a ballot,” the U.S. Election Assistance Commission website explained.

With the majority of poll workers being over the age of 60, it is encouraged for people to step up and volunteer due to COVID-19 making those over the ages of 60 more at risk of complications if the virus is contracted.

Compensation for being a poll worker varies within location. Those interested in volunteering can visit https://www.eac.gov/help-america-vote and select their state and county to register.