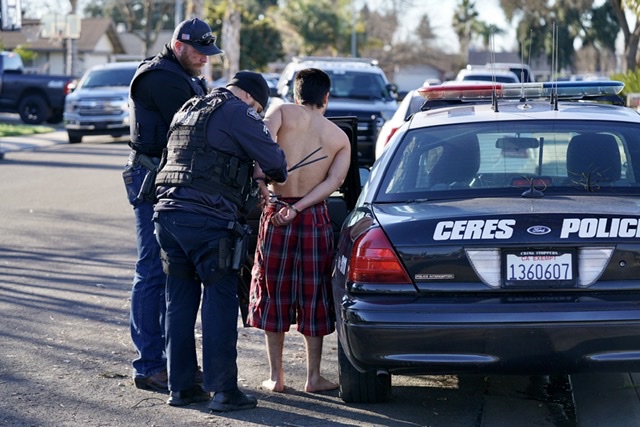 On a sunny but cool Thursday morning a team of officers used an armored vehicle to approach a home on the 2200 block of Venus Drive. Ceres Police SWAT officers served a warrant at the home where they took their suspect into custody at about 8:00am.

Later in the afternoon, Ceres SWAT accompanied by the Stanislaus County Sheriff’s Office SWAT team served a second warrant related to the case on the 400 block of Sundance Way in Modesto.

The teen was charged with murder in the shooting death of 26 year old Alexis Perez. Police said Perez was found suffering from gunshot wounds on the 2600 block of Magnolia Street on January 21st. Perez was found inside of a white Honda Accord after it had collided into a parked car.

Responding officers pulled Perez from the car and began life-saving efforts until an ambulance arrived. He was rushed to a hospital but later died.

No motive for the shooting or further details were provided Thursday. The teen was booked into Juvenile hall on charges including murder, assault with a deadly weapon, and possession of an assault weapon.

Anyone with information regarding this case is encouraged to contact Detective Matthew Berlier at (209) 538-5616 or Crime Stoppers at (209) 521-4636 where callers can remain anonymous.