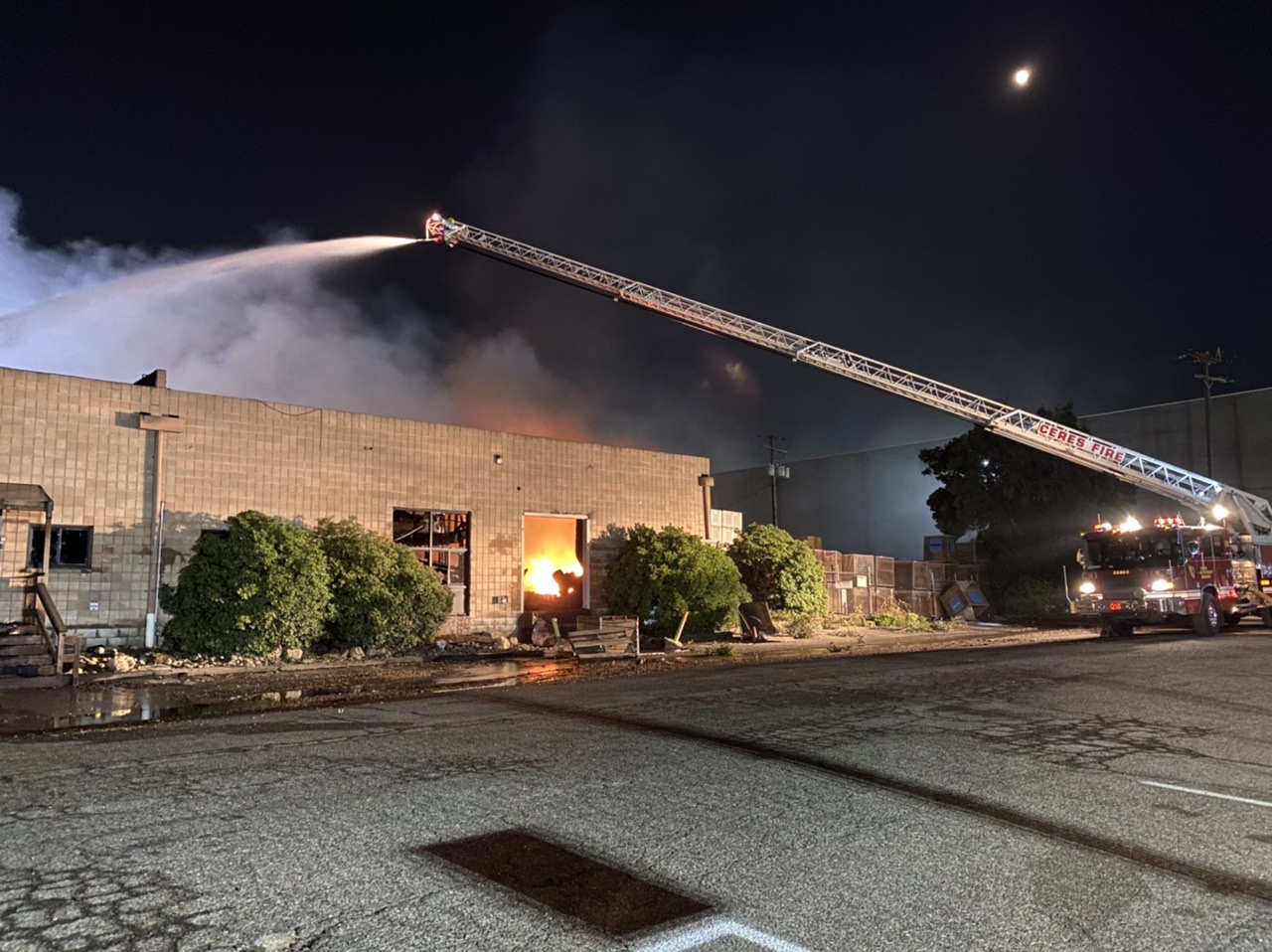 MODESTO – A massive fire that tore through two warehouses and several tons of nut product was expected to keep firefighters busy overnight and into Monday.

The fire was dispatched at about 1:30pm near the intersection of River Road and Bunker Avenue. With the fire being an unknown type, initially a single Ceres Fire engine was dispatched. Officials at the scene say employees at the Pepsi facility called in the fire.

Arriving firefighters encountered major smoke and flame from behind a warehouse on Bunker Avenue, calling for a commercial structure fire response. Additional resources in downtown Ceres observed heavy smoke conditions from the fire, and soon more resources were called to the scene. In total, three alarms were called on the fire.

The fire was consuming about 1,000 tons of nut product according to Bret Presson, a Battalion Chief with the Ceres Fire Department. The fire had begun to extend into the warehouse and office building which it would eventually also destroy. Several crates and trailers were also destroyed.

The flames were extending so much that it also caught the roof of a neighboring beverage company warehouse on fire. The fire caused a lighting fixture to collapse into the building, scrambling firefighters to prevent any further damage there.

Resources county wide were drained during the firefight. Presson said a total of 19 engines, 4 trucks and 4 water tenders responded to battle the blaze. San Joaquin County sent a strike team of firefighters to cover additional calls within Stanislaus County while crews were tied up on Bunker Avenue.

The City of Modesto sent a backhoe and front loader to assist fire crews. Presson explained that the incident was a challenge in the fact that the nut product had to be separated and drowned to be properly extinguished, similar to a hay fire. Utility companies also were called to respond to secure gas and electricity.

Eight chief officers and a Modesto training officer responded due to the complexity of the fire. One firefighter suffered a heat related illness and was transported to a hospital. Presson said he was treated and released shortly after and sent home to recover.

Firefighters were expected to remain at the scene overnight and into Monday to continue extinguishing flames, which at 10:00pm were still visible. Smoke continued to drift south into Ceres.

The cause of the fire was under investigation.