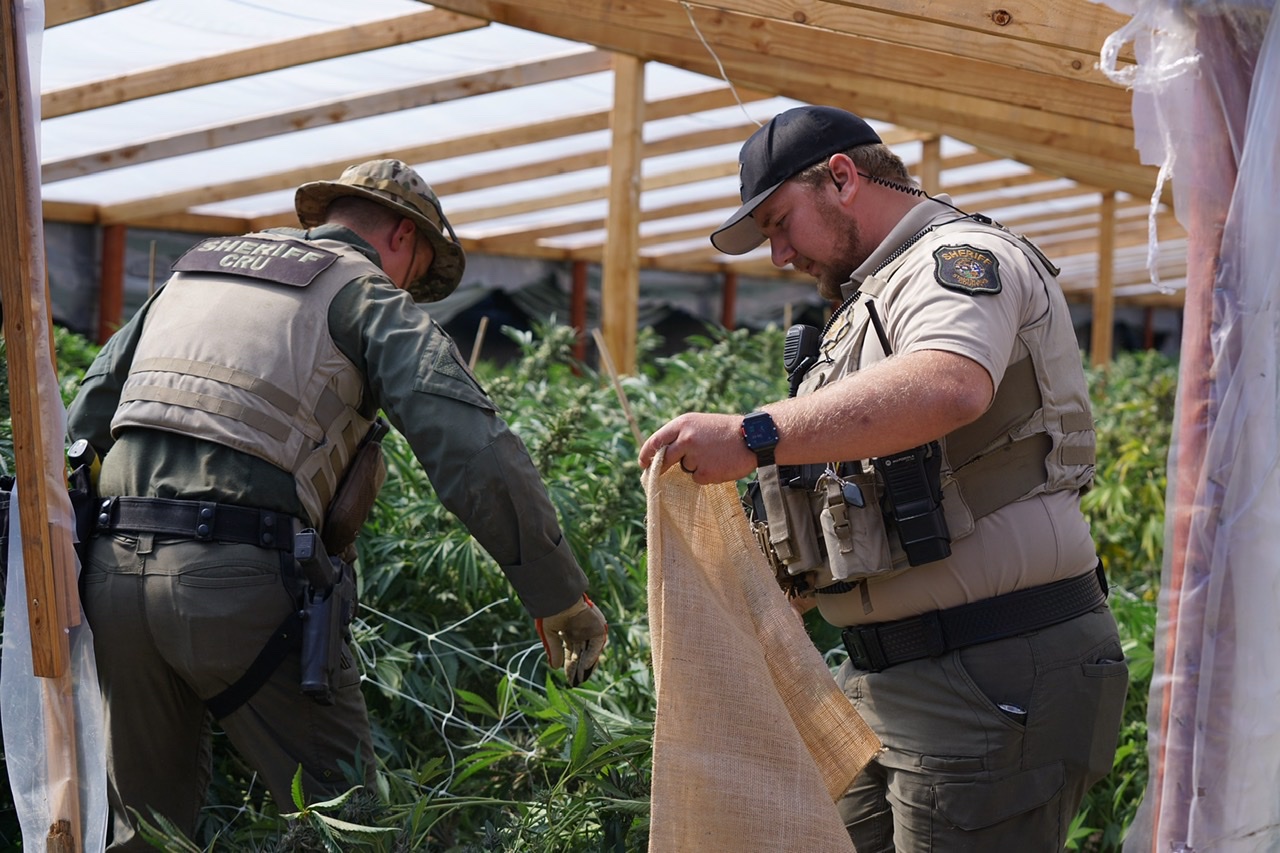 Deputies take samples to be analyzed from an illegal outdoor marijuana grow on Sam Avenue.

STANISLAUS COUNTY – A week-long operation targeting illegal marijuana grows and the associated crimes that come along with them revealed a myriad of concerns.

The May 31st to June 4th operation codenamed “Green Day” set its sights on over 60 properties across Stanislaus County in both residential and rural settings. The mission was a joint effort between various agencies including the Stanislaus County Sheriff’s Office, teams from the Bureau of Cannabis Control, California Department of Fish and Wildlife, County Animal Services, and police services for the communities of Waterford, Hughson, Patterson and Riverbank. Support was provided by the Stanislaus Regional 911 center, a team of crime and data analysts, special investigators, air support and SWAT.

In addition to the arm of law enforcement involved in the operation, representatives from Stanislaus County Public Works and code enforcement were on hand as well.

Each day began with a briefing, which consisted of a team meeting to formulate a plan to execute warrants at each given location. The briefing would analyze and assess threat risks, potential suspects that may be at the location, entry points to the properties, and assignments for each deputy. By 7:00am, each team was on its way to their location.

Thursday morning we were invited along to observe the CRU team. The first two locations happened to be on the same road, separated only by one house. The team opted to surround both properties simultaneously. The strategy paid off, as workers tending to the grow quickly attempted to flee on foot but were quickly detained. During a search of the properties, one person was found hiding behind sheets of heavy black plastic along a fence line. A handgun and pellet rifle were found at the properties.

Once the properties were secured, we were allowed to take a look at the grows. Each grow took up at least half the space on each property, totaling perhaps a half acre. Greenhouses were made of lumber and PVC pipe and covered in plastic. Electrical wiring into the grows was clearly unsafe and obviously not up to code. Deputies mentioned it was at least the second time they had served a warrant on these properties.

Inside of the houses, the living conditions were bad. Entering the home, there was a dirty old couch in the doorway. Much of the home had been cleared to dry and process harvested marijuana. Metal lines were tied from wall to wall to hang harvested plants.

In the kitchen sat a propane tank and a grill. Some leftover bacon and eggs sat in a pan, while against the opposite wall an open pack of cigarettes sat on a mini refrigerator. A pile of clothing sat nearby, but there was no table or chairs to sit on. There were cracks and holes in the walls and floors. The bathroom was located in the back of the home, in poor condition because of its disuse. The shower head was modified to route water out through a hole in the wall to the grow outside. Sadly, this was the cleaner of the properties we would see throughout the day.

Deputies counted and took samples of plants and photographed evidence gathered at the scene. Two friendly dogs were taken by animal services, and soon after a front loader was brought to destroy the grow operation on site. By this time the sun was peaking, bringing on the hotter part of the day.

Back at the command post in the sheriff’s office, analysts tallied data from each location. A dispatcher in the same room coordinated communications with the teams in the field.

After a short lunch break, the team held a briefing for its next location. The warrant was for a large compound in the west county area. At least one of the suspects connected to the grow was previously arrested at the first site. Images of the property showed trailers, outbuildings, and several greenhouses surrounded by tall metal sheet walls, as well as several broken down vehicles around the home.

A set of bolt cutters was used to open a large sliding gate. It was the only entry point for the property. A flash-bang device was used to divert attention as deputies made entry to begin their search, as a team off-site used a drone to watch from above. No one was located on this property, and half of the grow had already been harvested. One had already been replanted with cloned plants, while two others had fully mature plants. It is unclear why the property was left unattended.

This property was in a worse state of disrepair. The kitchen was very similar to the first locations, but there were plants and clones sitting on countertops and the floor. Dirt and mold covered the floor as with the previous home, but the stench of leaking sewage makes one wonder how anyone could stay inside.

In what would have been the family room of the home, deputies searched under a mattress and through luggage. A tightly packed suitcase held several changes of clothes. Most of it was jeans and sweaters. A coat and some shirts. The luggage was a clear indicator of a nomadic lifestyle, one thing deputies said was common among those working grow operations. They could manage multiple grows or bounce between communities, moved by those they work for. On a shelf sat two statues of Saint Jude with dollar bills pinned to them. A belief that the act would bring financial blessing to those who displayed it, according to one deputy. Also a common sight at marijuana grows.

In the next room over, deputies searched through another piece of luggage. A pink wallet revealed two passports from Mexico. One belonged to a man and the other a woman, barely about 21 years old. It was unclear how they ended up working here, but officials said the possibility that they were being trafficked was very real. Some immigrants who are smuggled across the border can be placed to work in grow operations to pay off a debt. These operations are typically tied to cartels, and often times prevent the workers from leaving the properties they are tending.

In other grows, deputies found an unresponsive elderly woman who required hospitalization. She had been neglected and had bed sores. There were also child endangerment issues, after children had been found at some of the grow sites. Emaciated animals at another property. In the airport neighborhood, authorities arrested an out of compliance sex offender.

None of the grows raided were operating within legal limits. Six plants per property is the permitted amount, and the grow cannot be outdoors. Many were stealing utilities. Most, if not all complaints came from neighbors near the grows.

“Oftentimes, they are the targets of violent, take-over style home invasions where people are armed with weapons,” read a press release from the Sheriff’s Office. “Shootings, robberies, aggravated assaults, kidnappings and burglaries are some of the unintended victimization consequences for those trying to profit from the sales of black-market marijuana.”

In total, 64 properties were searched. The operation resulted in just over 74,000 marijuana plants eradicated with an estimated street value of nearly $100 million dollars. Nearly 1700 pounds of processed marijuana was found, 46 firearms and over $172,000 in cash was seized. Utility companies shut off power to 26 locations, and 16 code enforcement referrals were made. Unsafe and dangerous living conditions resulted in arrests for both child and adult endangerment. 83 individuals were either arrested or cited during the operation.