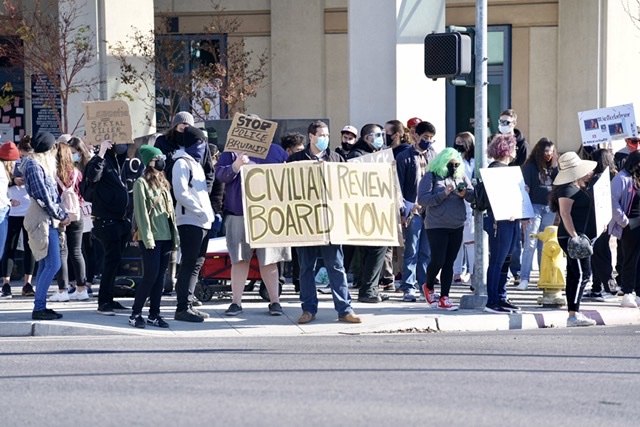 MODESTO – A demonstration was held Saturday in protest against the Modesto Police Officer involved in the shooting death of a man on December 29th.

About 100 or so people gathered in front of the police department near the intersection of 10th and G Streets at about 11:00am. Many held signs urging justice for Trevor Seever, who was 29 years old. Seever was shot by Joseph Lamantia, who has been an officer with the department for 12 years. Many in attendance voiced their criticism against Lamantia, who was previously involved in several other shootings during his time at the department.

Police responded to the 2300 block of Woodland Avenue in Modesto on the day of occurrence, after receiving a 911 call from relatives of Seever’s. The 911 call was made by Seever’s sister, and released in a video by the Modesto Police Department. The recording indicated that Seever had purchased a firearm the night before, and had made vague threats toward his relatives. According to a press release by the Modesto Police Department, Seever had send text messages to his family indicating he was on his way to their home.

In a video briefing posted to the department’s YouTube channel, Interim Police Chief Brandon Gillespie stated that officers had previous contact with Seever, who had made anti-law enforcement posts to his social media accounts earlier in the month. This prompted safety bulletins to be distributed to responding officers.

Lamantia was first to arrive in the area and located Seever at the Modesto Church of the Brethren on Woodland Avenue. Bodycam video released by the department shows the officer with his gun already in hand before exiting his vehicle and firing his gun at Seever less than ten seconds after he spotted the individual. It is unclear what Seever was doing at the church before he was located, but relatives on Saturday stated he was sitting on a bench.

Within those ten seconds, Lamantia broadcasted over his radio that he was engaging in a foot pursuit and shouted for Seever to get on the ground twice before opening fire. Four shots were fired at Seever, who was near the northwest corner of a building at the church complex approaching a parking lot. The unclear video appears to show Seever attempting to run away.

Lamantia advanced and ordered Seever to show his hands after broadcasting he had fired his weapon. In the background, Seever can be seen with his hands raised. The officer then provided his location to dispatch as Seever can be seen moving his right arm in the background. It is unclear if he was holding onto something to maintain balance, however his left arm can still be seen raised as Lamantia fires his weapon again. At this point in the video, Seever falls over screaming in pain. The officer then advances to cover behind a tree.

Seever was provided aid by officers and rushed to a hospital, but he later died. Officers were unable to find a weapon at the scene.

“I haven’t even watched the whole thing,” said Katrina Rodriguez in regard to the police video. “It’s ridiculous to see how destructive and horrific he went in with the intent to kill my cousin.”

Although she described the body cam video as difficult to watch, Rodriguez said she and her family are glad that it exists.

“How many people were shot and killed without a bodycam? Thankfully we got to see the bodycam, but how many didn’t have that?” Rodriguez said her family believes the video is vital evidence that can potentially shed light on her cousin’s case. She questioned why the officer was allowed to remain on the force given his history.

Lamantia was involved in several other shootings, some of them fatal. On September 6th 2010, Francisco Moran was shot and killed after police responded to a disturbance. It was believed Moran was armed with a knife, but it was later determined to be a spatula. In June of 2016, Lamantia was involved in a shooting during a narcotics operation that killed 21 year old Omar Villagomez in Turlock. The shooting happened near the Starbucks at West Main Street and Highway 99. Later that year on October 8th, Lamantia would also be involved in a shooting that killed Kim Jackson. Jackson, a 53 year old woman, was armed with knives and charged officers during that incident according to a press release. On October 20th 2020, Lamantia was involved in the shooting of double homicide suspect David Cummings Jr. in Stockton. He survived that shooting and is currently awaiting trial.

“It sucks that it has to be this way,” Seever’s cousin continued. “Maybe it’s all for a reason. Maybe they will finally see the consequences.”

The group left signs and posters on the steps and memorial statue at the police department. Some notes had expletives directed toward the officer, while others asked for justice in the loss of their relative.

Rodriguez said her family was looking into legislation like Assembly Bill 392 which redefines the circumstances in which deadly use of force by police is justifiable. Under that law, deadly force can only be used when defending against imminent threat to life or bodily injury, or to apprehend a fleeing suspect when the officer believes they will cause serious injury or death unless immediately apprehended.

Seever’s loved ones said no matter the circumstances, they did not anticipate his death to be an outcome and believe he could still be alive had a different officer responded first.

“You do not get to choose who lives or dies because you want to be the savior of the day,” Rodriguez added.